The Isle of Colonsay boasts a number of places worth visiting. Famous gardens, an ancient priory, a heritage centre and a micro brewery there is plenty to see and do for all ages.

The Colonsay House gardens are considered to have one of the finest rhododendron collections in Scotland and the cafe serves delicious lunches and home baking.

There is a magnificent ancient priory on the neighbouring island of Oronsay.

Colonsay has its own beer micro brewery, the most remote brewery in Scotland! It is located next to the Village Hall.

There are 2 gin distilleries; Colonsay gin made by Wild Thyme Spirits located at Kilchattan and Wild Island Gin made by Colonsay Brewery next to the Village hall.

There is a charming Heritage centre located in the Baptist Church in Kilchattan on the western side of the island. 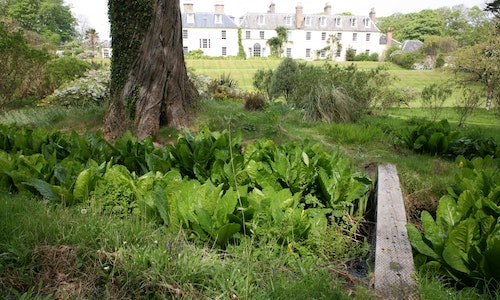 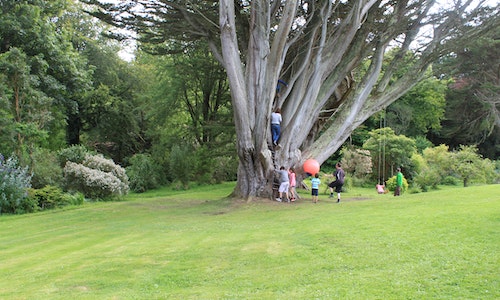 The Colonsay House rhododendron and woodland garden is considered to be one of the finest rhododendron gardens in Scotland.

The Colonsay House private gardens and cafe are open from April to September on Tuesdays and Thursdays from 12 to 5pm. In October, the gardens and cafe are open on Tuesdays and Thursdays from 12 - 4.30pm. The cafe serves delicious lunches and afternoon teas, everything is baked on the premises and we use our own home grown produce where possible. There is an entrance fee of £3 per adult and £1 per child to the inner gardens.

The outer walled woodland gardens are open to the public for no charge at all times.

The garden was planted mostly in the 1930's and has an exceptional variety, not only of rhododendrons, but also of trees and shrubs including some exotic species from the southern hemisphere.The woodland garden covers some 20 acres.

The design takes full advantage of the natural features of the landscape with paths winding through hidden wooded valleys and up hills to reveal magnificent vistas toward and beyond the early Georgian House. There is a large pond and a stream running through the centre of the garden.

The lighthouse garden's centrepiece is the lens from the Rhubhal lighthouse on Islay.

As the climate is mild, it is possible to grow a large variety of plants, including subtropical and more tender plants.There are eucalypts, myrtle, acacia, eucryphia and magnificent 50 feet tall magnolias dotted throughout the garden.

Apart from the rhododendrons, there is also a wide selection of shrubs including pieris, fuschia, hydrangea, olearia, escallonia and camellia. 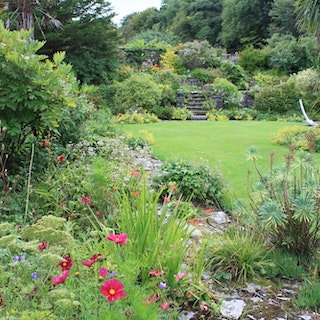 The island of Oronsay is accessible from Colonsay at low tide. The ruins of the priory church and magnificent Celtic cross date from the 14th century. In the Prior’s House, there are around 30 beautiful carved stone tombstones dating from the 15th and 16th centuries. It is said that St Columba landed on Oronsay on his way to Iona in the 6th century. When he climbed Ben Oronsay he found he could still see Ireland and decided to move on! You have about two hours either side of low tide to walk to and from Oronsay, weather permitting. Check in the office, on the noticeboard or at the Post Office for times of the tides. The RSPB manage the farming and dogs are only allowed on Oronsay if on leads. 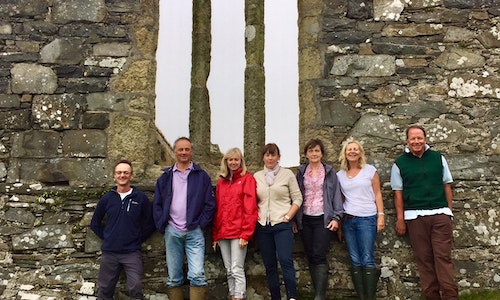 The Heritage centre is located in the Baptist Church in Kilchattan.

The door is usually open in the Baptist church; come and have a look at exhibitions and artefacts of local interest.

The island’s very own craft micro brewery producing lager and ale. It is also a gine distillery and makes a range of gins. Located at Scalasaig, the Brewery and Brewery shop are open for viewings and sales throughout the season.
Tel 01951 200190

Low occupancy discount of up to 20% (not July or August).

Traditional farmhouse recently renovated with oil fired central heating. Close to the hotel, down a short track - the shop and harbour are just a 10 min walk away. South facing, in an open sunny position, with extensive countryside views.

The house is situated close to the harbour with wonderful views toward Jura and Islay and has a large garden enclosed by a low drystone wall. It has Wifi. AVAILABLE FOR SHORT BREAKS.

This stone cottage has wonderful views over Loch Fada and is set back about 100m above the road up a short track. AVAILABLE FOR SHORT BREAKS AND ANY DAY CHANGEOVER.

Sheltered cottage in the heart of the rhododendron gardens near Colonsay House. Beautifully refurbished in 2016 - now with oil-fired central heating, 2 bedrooms, 2 bathrooms and a large open plan sitting/dining/kitchen. It has WiFi. AVAILABLE FOR SHORT BREAKS. ANY DAY CHANGEOVER.

We have robust and strict protocols to enable us to operate our businesses safely. This will help protect guests, staff and our local community. We are accredited by Visit Britains's "Good To Go".

Now in its 10th year, the Colonsay Book Festival will be held on the weekend of 30th April/1st May 2022. It is the smallest and most remote literary festival in the UK but it attracts authors with huge reputations.

Following the huge success of our Festival of Spring, we are delighted to announce that the festival has a new theme of the great outdoors! It will run from 25th April to 10th May 2022. The programme will be available in due course at www.springfest.co.uk

View all our news